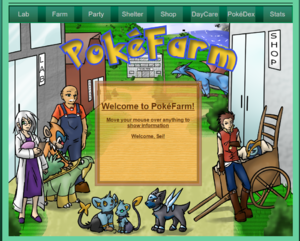 PF1 Welcome Page
Often referred to as PF1 or Old Pokéfarm, this was the original version of the game found on the website pokefarm.org (the website is no longer hosted by Pokéfarm). It entered development on the 9th of October 2009 until the 1st of January 2010 when the site's servers were opened to the public. PF1's code was a project started by Niet, whose screenname at the time was Kolink. Pokefarm.org was up and running for just over 5 and a half years (in comparison to PFQ, whose servers opened on the 1st of January 2013), until its eventual shutdown on the 27th of October 2015[1].

The Black Market was a shop on PF1 that required Savage Crystals to purchase from it. This shop contained many unique items that could not be purchased or obtained through any other method.

Scratch Cards were rewarded for completing orders in the Black Market. There were different types of Scratch cards depending on the amount of Savage Crystals that were spent on the order.

Bonus days were special days on PF1 that were usually triggered by a counter. When a counter is filled, a bonus day begins after the next reset (similar to PFQ's Bonus Counter). For the entire 24 hours, something special happened. There were six different counters, each with a different bonus effect. Those counters were:

Confusion was a status that could affect a Pokémon. This was achieved by using the Super view mode of the Party page or a Spinda Box. Confusing only affected Scouring. If a Confused Pokémon was sent on a long mission and it became lost it would take longer for it to return.

The Pokémon had to be in the user's Party. Then, the user would either click the arrow images or use the central scroll button of their mouse to spin the party disc. If done correctly, Pokémon in the Party would be surrounded by yellow sparkles when the disc stopped completely. Any Pokémon that sparkled had a random chance of becoming Confused.

If the Pokémon was Confused, the name would be coloured yellow instead of white. Users could use a Pokémon Tracker to see if a Pokémon in their Fields were Confused. A yellow duck image would be located under the name of the Confused Pokémon. A user could also go to its private Summary and find text under the image stating.
"Loam is staggering around in a Confused manner... A Yellow Flute is needed to snap him out of it."
If the Pokémon was on a Scour it would have a question mark bubble over its head.

Confusion could be cured by using one of four methods. Those methods were using a Yellow Flute, using a Lum or Persim Berry, trading the Pokémon, or sending it on a Scour mission until it becomes lost.

Custom Sprite Pokémon that were obtained from an event or giveaway were distributed as an Egg that looked the same as a normal egg.

An Egg containing a Custom Sprite Pokémon would break a Shiny Chain unless it was designated "obtained under unknown circumstances" or "obtained through a Special Event". Similarly, it would not break a chain if the Egg was of the same species as the user's current chain.

The Custom Sprites that were obtained from the P3 Lab were applied by being the correct species, evolution, and gender to a Pokémon that a user-owned. They could not be Shiny. This made them similar to PFQ's costumes except they were permanent. There were three exceptions to these rules which were the Defective Missingno., the Power Suit Rhyperior, and the creator of a user-submitted Custom Sprite. The Defective Missingno. did not need to be owned, instead, it had created a new one during purchase. The Power Suit Rhyperior did not cost any Crystals; although, the user did have to have a female Rhyperior and a Power Suit Forme-change Item. Finally, the creator of user-submitted Custom Sprite Events was allowed one free sprite of their submission without providing a base Pokémon.

Holiday Special Custom Sprites were released directly to the P3 Lab in honour of a specific holiday. They were available year-round, however, they were cheaper during their specified holiday while the prices were increased during the other months. As an example, Amorvoir was released in honour of Valentine's Day and cost 5 Savage Crystals from the 13th to the 15th of February. During the other times of the year, it would cost 40 Savage Crystals.

The Custom Sprite Pokémon could not be dressed up, evolved, or forme changed. Their regular sprites would be shown in the Dream World, PokéWalker, Super View of a Party Page, and in the Trade Centre. They did not count as a separate species, instead, they would register as their regular species in the PokéDex. They could also be used as a breeding pair but would not produce Custom Sprite Eggs.

A screenshot of the Dream World. 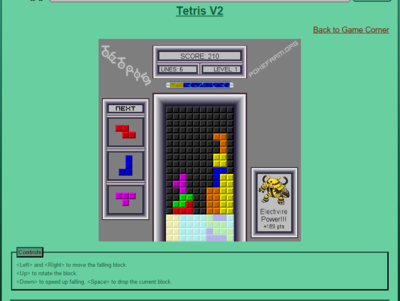 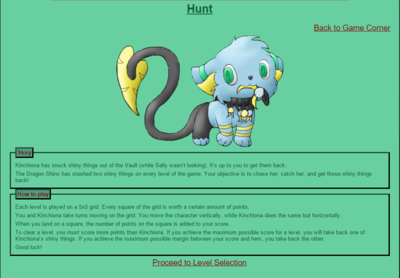 The Heritage page was where the lineage of a Pokémon or Egg was shown. A user could go to this page and view the Pokémon/Egg's children, siblings, parents, grandparents, and great-grandparents if the Pokémon/Egg had any. It also allowed users to view who currently owned the Pokémon and what its nickname was. If a Pokémon or egg was semi-transparent, then it was being prepared to enter the Shelter from the DayCare. Whereas, if it was removed from the Heritage page then it indicated that it was released from the Shelter into the Wild.

Spin the Wheel was a game that enabled users to trade Pokémon for Amulet Coins, or AC for short. The AC could then be used for betting on the Spin the Wheel game and to win prizes.

Each Pokémon species had a fixed value of Amulet Coins which reflected their rarity. A shiny Pokémon was worth 100 times the value of a normal Pokémon. There was also a cap of 25 Pokémon that could be traded each day if the user was not the Original Trainer due to a sudden surge of people adopting Pokémon from the Shelter solely to trade them in for AC.

While betting, the user would decide the amount of AC they would use and this amount would influence the prizes and their probability. There were a minimum and maximum betting amount for each field. If a user bets an AC amount between the min. and max. amounts of a field they would get the chance to win that prize.

Savage Crystals were a form of currency used in the Accessory Shop EX, Black Market, and the P3 Laboratory.

One Savage Crystal equalled 1 British Pound (£ or GBP). They were bought through a website called MyK2. A user would create a free account and link their MyK2 account to their PF1 account to transfer the Savage Crystals that the user bought. If an item cost £1.65 it would be equal to 1 Savage Crystal and 65 Crystal Shards.

They were also a possible prize from Scratch Cards and Crystals that had been given away during special occasions. Savage Crystals could not be gifted or traded once it was on the PF1 account; however, they could be transferred back to the user's MyK2 account.

Scavenger Hunt was a special event that distributed special prizes to users who completed the hunt. The hunt lasted until the last prize was claimed. The rules were:

Users could observe how close they were to meeting the requirements on the Hunt page. Requirements that had been met appeared in the colour of the site skin that the user was using.

Summon Tablets were a type of Treasure with 15 different types of tablets. Their appearance and sale value were identical; nevertheless, their name varied depending on what they were connected with. For example, "Summon Tablet (Haures)".

Users could recharge Summon Tablets which were Quest-related items at the Merchant. A user would pay Doug

Super-Lite PokéFarm, often referred to as SLPF or Super-Lite, was a version of PokéFarm that could be used only for making interactions. It had almost none of the features of the main site but did have a few features designed to make interacting easier. One benefit of Super-Lite PokéFarm was that the page displayed the status of a Pokémon/Egg. Users could not click on a Pokémon/Egg that they had already given an interaction, that was currently locked, or that (for Eggs) was ready to hatch.

For more detailed information, please visit PF1 Transfer. The PF1 Transfer was a feature that allows users who had a PokéFarm 1 (PF1) account to transfer certain Pokémon from their PF1 account to their PFQ account. This feature was available to all users but was only usable by those with a PF1 account.

Ultimate accounts, also known as paid accounts, offered players a way to access several perks and features which were otherwise unobtainable for a certain amount of real money (similar to PFQ's Hypermode). Paid accounts were obtainable only on Black Market or through trading for a voucher with other players. Ultimate accounts came in the form of a 1-month voucher for 8 Savage Crystals or a 1-year voucher for 80 Savage Crystals. All vouchers a user had purchased but not redeemed could be seen on the Black Market page.