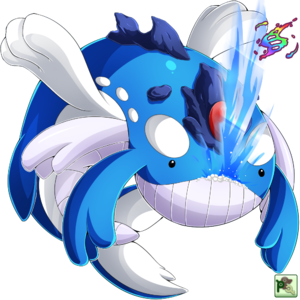 Drawn by Sugar Luck.
Mega Wailord Q is an Exclusive Pokémon released as part of the twenty second Mass-Click Weekend. It was released on the 30th May 2016, in the form of a Mega Stone.

The Mega Wailord Q Exclusive was distributed as part of the twenty second Mass-Click Weekend of PokéFarm Q. Its Mega Stone was given as a reward to any individual user with at least 10,000 interactions during the event weekend.

The Wailordite Q was also the twenty fifth Mega Stone released as part of the Mega Lookback event on September 12th, 2017. The special code could be retrieved from the PokéFarm Twitter or Facebook pages from 12 September 2017 to 31 January 2018.

It becomes even more gargantuan upon Mega Evolving. Its fins behave like wings, allowing it to soar through the sky.