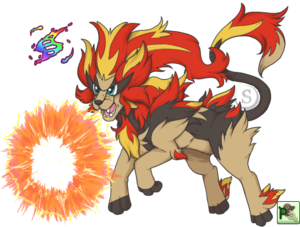 Drawn by Sei.
Mega Pyroar Q is an Exclusive Pokémon released as part of the thirty-sixth Mass-Click Weekend. It was released on the 28th August 2017 and was released in the form of a Mega Stone.

The Mega Pyroar Q Exclusive was distributed as part of the thirty-sixth Mass-Click Weekend of PokéFarm Q. Its Mega Stone was given as a reward to any individual user with at least 10,000 interactions during the event weekend.

Mega Evolution levels the playing field between males and females. In this form, a female Pyroar can become pride leader.