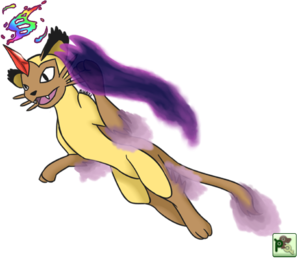 Drawn by Shazi.
Mega Persian Q is an Exclusive Pokémon released as part of the thirtieth Mass-Click Weekend. It was released on the 27th February 2017 and was released in the form of a Mega Stone.

The Mega Persian Q Exclusive was distributed as part of the thirtieth Mass-Click Weekend of PokéFarm Q. Its Mega Stone was given as a reward to any individual user with at least 10,000 interactions during the event weekend.

As the Mega Evolution of a proud Pokémon, it demands to be treated as royalty. Only unending praise can appease it, lest it slash its own Trainer instead.