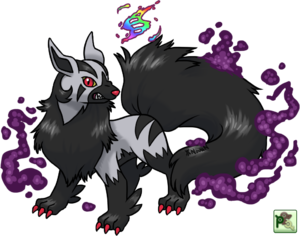 Drawn by Novan-Chan.
Mega Mightyena Q is an Exclusive Pokémon released as part of one past Christmas event, which was the very first PokéFarm Q event. It was released on December 26th, 2013, and was released in the form of a Mega Stone.

Mega Mightyena Q can be obtained through the use of the Mega Stone named Mightyenite Q on a Mightyena. Mightyenite Q can be obtained through trading, boxes, by purchasing and redeeming a Mega Stone Voucher from the Tournament Prize Shop, Cheat Codes or via a secret code during signup. Note that if obtained via the secret code, it will not appear in one's inventory until they have obtained the Mega Ring from the Task List (evolve 50 Pokemon, see Achievements in your Party).

The Mightyenite Q event was the first Pokefarm Q-exclusive Mega Stone to be released on PokéFarm Q and was released as the final reward of the Christmas 2013 Event, whereby one had to receive rewards from a special page leading up to Christmas and achieve 1,000 interactions on 2013 Christmas Day.

The Mightyenite Q was also the first Mega Stone released as part of the Mega Lookback event on 27 March 2017. The special code could be retrieved from the PokéFarm Twitter or Facebook pages from 27 March 2017 to 31 January 2018.

Mega Evolution causes it to become highly aggressive. It constantly looks for the next opponent to face and may even turn on life-long partners.