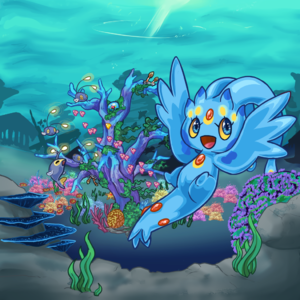 Drawn by Novan-Chan and coloured by Sei.
Mega Manaphy Q is an Exclusive Pokémon released as part of the seventy-fourth Mass-Click Weekend. It was released on the 4th of January 2021 in the form of a Mega Stone.

The Mega Manaphy Q Exclusive was distributed as part of the seventy-fourth Mass-Click Weekend of PokéFarm Q. Its Mega Stone was given as a reward to any individual user with at least 10,000 interactions during the event weekend.

This King of the Sea floats gracefully through its kingdom healing dead reefs and protecting rare treasures. Trainers who own one have an easier time forming bonds with Pokémon.