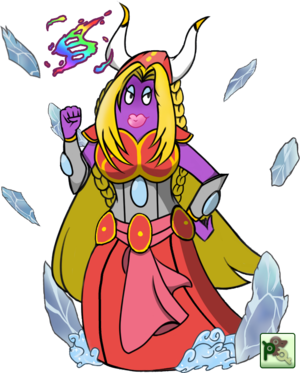 Drawn by Emmanectric.
Mega Jynx Q is an Exclusive Pokémon released as part of the 12 Days Of Christmas. It was released on the 5th January 2015 and was released in the form of a Mega Stone.

The Jynxite Q was also the sixth Mega Stone released as part of the Mega Lookback event on 1 May 2017. The special code could be retrieved from the PokéFarm Twitter or Facebook pages from 1 May 2017 to 31 January 2018.

Mega Evolution makes her as cold and heartless as ice. She sings and moves seductively to lure her prey closer, then bestows a kiss of death.