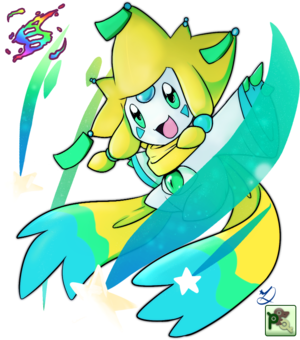 Drawn by Fujin Yumi.
Mega Jirachi Q is an Exclusive Pokémon released as part of the twenty fourth Mass-Click Weekend. It was released on the 1st August 2016 and was released in the form of a Mega Stone.

The Mega Jirachi Q Exclusive was distributed as part of the twenty fourth Mass-Click Weekend of PokéFarm Q. Its Mega Stone was given as a reward to any individual user with at least 10,000 interactions during the event weekend.

The Jirachinite Q was also the twenty seventh Mega Stone released as part of the Mega Lookback event on September 25th, 2017. The special code could be retrieved from the PokéFarm Twitter or Facebook pages from 25 September 2017 to 31 January 2018.

Mega Evolution keeps it constantly awake. As penance, any wish it grants becomes corrupted and takes on a sinister twist.