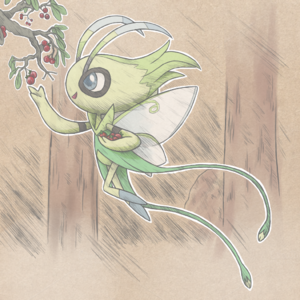 Drawn by Novan-chan and coloured by Sei.

Mega Celebi Q is an Exclusive Pokémon released as part of the sixty-second Mass-Click Weekend. It was released on the 6th of January 2020 in the form of a Mega Stone.

The Mega Celebi Q Exclusive was distributed as part of the sixty-second Mass-Click Weekend of PokéFarm Q. Its Mega Stone was given as a reward to any individual user with at least 10,000 interactions during the event weekend.

The seeds at the end of Mega Celebi's vines contain enough nutrients to make miracle salves. Flora flourish in its wake, often including an overabundance of berries.