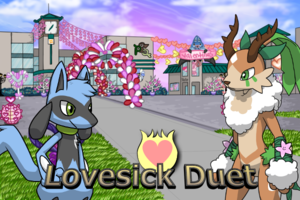 The Lovesick Duet event was an Event that ran for two weeks in 2019, starting on February 14th and ending February 28th. During the event, users completed a list of tasks relating to a storyline featuring Taimorpha and Hydrinifor. During this time, Sweet Hearts and Cookies could be exchanged like previous years via the Sweet Heart Stand. However, there were no prizes given for number of treats given/exchanged.

The user arrives at a very pink and festive town as they are approached by Garthic. Garthic tells the user that they have almost finished setting up the decorations and gives them a Sweet Heart and prompts them to go to a stand covered in chocolates and flowers.

After returning from the stand, you meet Garthic, who is promptly startled by Flaroptera. He is having troubles helping a Pokemon, and asks for the user's help, showing them an obviously sick Taimorpha. The Taimorpha talks for a while, which Garthic translates for you. The Taimorpha's love interest, Hydrinifor is also sick, and Taimorpha wants to help him but the fever is making it difficult. Garthic then invites you on a walk with the other Pokémon.

The user and the Pokémon approach Leslie's stand. Leslie asks if the group is in need of any flowers. Garthic explains that Hydrinifor is sick, and then Leslie offers some herbs. Garthic picks up a bottle and asks for what Leslie tells him is Heal Powder. Garthic asks for the price and Leslie tells him that he is in need of some Big Mushrooms. Garthic then sends you, Taimorpha, and Flaroptera to collect some Big Mushrooms.

When the user meets back at the stand with the Big Mushrooms, the user realizes that together everyone has collected more than 10 Big Mushrooms! Leslie is surprised by the amount, and Garthic purchases the Heal Powder. Flaroptera then has to leave, leaving the user and Garthic with Taimorpha. Taimorpha then expresses that she needs another gift for Hydrinifor, and Garthic suggests finding some Sweet Hearts. The user is then asked to help out.

Receiving the Sweet Hearts from the user, Taimorpha runs off. Garthic then asks the user for some help, as Sei has been avoiding him and something's up. He then asks if the user can help him find her. Together, the user and Garthic take a walk in search of Sei. 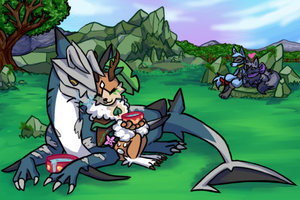 When the user returns with the berries, Sei walks over, asking what a "stumblebum" is. Sei then notices that the user has the berries. Hydrinifor talks for a moment, and Sei agrees with him, saying that it will make Taimorpha feel better. Garthic comes over saying that you need medicine, but Sei cuts him off, claiming that she will be healed with the power of love. Garthic doesn't seem to quite agree, but goes with it anyway. Hydrinifor then says something, and Sei remembers that she needs something from town, and says that she has "sand in places she didn't know she had places." Garthic, Sei, Hydrinifor, and the user all head back to town. Sei then struggles to find the correct plural form of Pokéblock+, and just resolves with saying that she needs them for the soup. Garthic asks if it needs to be a specific type and Sei says that it does not, as long as it's fresh. The user is then sent back to obtain the blocks.

When the user returns to the group, Sei is happy that the blocks have been collected, then says it's time to make the soup. Sei returns the slightly wet blocks a few moments later, saying that they are too fresh. Sei then says that the power of the user's care in making them is now in the soup. Hydrinifor then launches into a lengthy discussion over what's left to do. Sei then translates that Hydrinifor wants to get Taimorpha a blanket or something of the sort, as she is cold this time of year. Sei counters that she would need something lighter to wear around, and suggests a scarf. Garthic counters, claiming that it would not be warm enough. Garthic then suggests a cloak. Sei immediately agrees, and so does Hydrinifor. They decide to go see Avaragon to ask him to make a cloak. Garth and Sei are cute for a moment before everyone heads to look for Avaragon.

Once everyone locates Avaragon, Hydrinifor and Avaragon talk for a moment. Garthic asks where Flaroptera is, and he promptly comes over. Garthic asks him to help heat up the soup that they made. Flaroptera happily agrees. Then he starts breathing a plume of fire, and Garthic immediately panics. Sei had tears in her eyes as she stood fearfully. Garthic drops the soup in front of Flaroptera and gets out of the way. After Flaroptera is done, Sei comes back with Hydrinifor, and asks Avaragon if he'll make the cloak. Avaragon agrees, but asks for some Medium Gems in return. As usual, Sei turns to the user to provide the items.

When the user comes back with the gems, Avaragon has finished the cloak, and Hydrinifor looks delighted. Then the user, Hydrinifor, Sei, and Garthic all head over to see the couple exchange their gifts. Once they see each other, however, Taimorpha and Hydrinifor start fussing at the other about how they weren't resting. Sei and Garthic watch, with a little commentary. As the couple exchanges their gifts, Garthic decides to add medicine to the soup so that they feel better. A little while later, Garthic comes up to the user and thanks them for their help. He gives you some Lucky Soup, and then a special Sylveon sees what the user's done to make the couple happy and joins the user in their farm.

Amorvoir, Amy Celebi, and Teddibear could also be purchased for 500 ZC each

When a user was sent a gift of Sweet Hearts, or Cookies, SYSTEM would send the doted a message. The message would contain the username of the sender, or "A secret someone" if they chose not to reveal it, a sentence stating the amount gifted, and a quirky little saying at the end.