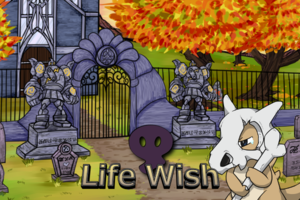 The Life Wish event was an Event that ran for two weeks in 2018, starting October 22nd and ending November 4th. It introduced the Silph Scope minigame and a new Custom Sprite.

The User heads into the main square, and Halloween decor is up, and spooky things are already a big hit! Alex comes to the player, greeting them and thanking them for coming to the gathering. Alex then asks the player if they have any plans and that they will be entering this Halloween contest once again. She has a minor flashback, thinking of Last years Halloween event, and fondly commenting that she has her own Salon now.

A Cubone runs across the bottom of the screen, and the player follows Cubone to see what they are doing. Alex lets you go to follow the Cubone and get down to the bottom of it's urgency. You catch up to Cubone, only to see Ravyne has been Cubones destination, so it seems at the moment. Cubone begins to talk to Ravyne in Pokespeak, and Ravyne asks the Cubone to slow down a bit. Cubone then repeats what is said, only a bit slower so Ravyne may Understand. Ravyne translates to you, that Cubone wants to make a wish.

Cubone softly sighs, and tells his wish to Ravyne, the latter having a softly worried look on their face, saying it was a large wish to be made. In which Cubone starts to be upset, thinking it can't be done. Ravyne quickly corrects, saying not only can it be done, it just requires a small donation of a little ghost gem. Then you are asked to give a ghost gem to aid Cubone. Giving the ghost gem to Ravyne, she tells Cubone to hurry back to where the gem is needed with his wish. Once he is gone, Ravyne confides in you and breaks the sad news of how Ravyne didn't wish to make him upset, actually needing a Medium Ghost Gem. Ravyne asks for a medium gem, so that way, Ravyne can make Cubones' wish come true. 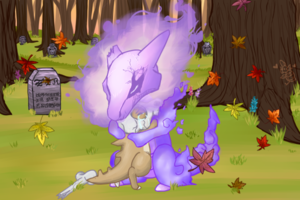 With the medium ghost gem, Ravyne says a series of complicated incantations, and seemingly, doesn't make the wish happen... Until Ravyne calculates how many gems are actually needed... 777 Large gems (as if we Users are made out of gems to spare) Initially, it seems YOU are the one making Cubone cry, the need to spare such a large quanitity, but Ravyne quickly has an idea, and drags Cubone and you along for the ride as they hurry off.

You quickly follow them, and head towards a cemetery. Initially, you were confused to the intent of Cubones wish, but now you have an idea of what his little wish was... Cubone wears a little look of confusion, until Ravyne translates once again, telling of how it seems his mothers grave seems to have moved, until it moves again, revealing it's a Kryptik, engaging you in battle! After battling the Kryptik, Cubone explains the intent of his wish was for his mother to find peace again after her final resting place was disturbed. You somehow have exited the tower, without making any progress. Ravyne infers that it is due to the ghosts causing the mischief, and causing them to come back out the way they came. Ravyne starts performing magic once again, and creating the Silph Scope for you to use and to locate the ghosts to be able to see them, and solve the puzzle.

As you advance in the tower, you find out who was the one who was causing the mischief in the first place: a Growlithe. The growlithe seems to have discovered the area, and all of its goodies! Bones, bones everywhere! Presumably, many of the spirits are understandably angry, including Cubones mother. Cubone steps in, and starts berating the Growlithe, telling them what they had done was wrong, and Growlithe was quick to growl to defend its findings. So giving up a bone that would be better for the Growlithe would allow you to put the bones back in their proper resting spot. Growlithe sees you, and immediately starts growling, until you offer the bigger and better bone. Growlithe in enjoying the better option, and allowing you to put the bones back where they belong, and Growlithe runs off with his better prize.

Suddenly, Cubones mother, and Enraged Marowak approaches the small group, her rage still fiery strong and not backing down without a fight! You ready yourself for a feisty Battle with Marowak. Eventually.. Marowak, having lost in the battle, started to ready an attack, only to recognize her child through her fury, calming as she was able to see him again. Cubone is overjoyed, being reunited with Marowak in spirit and body.