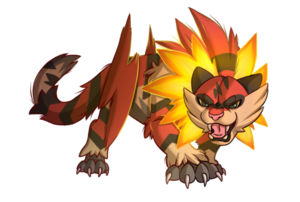 Drawn by DuchessLunaire.
Feral Incineroar is an Exclusive Pokémon released as part of the sixty-third Mass-Click Weekend. It was released on the 3rd of February 2020.

Feral Incineroar can be obtained by evolving a Torracat while it is near a Bunbori.

The Borealis Lantern was distributed as part of the sixty-third Mass-Click Weekend of PokéFarm Q. It was given as a reward to any individual user with at least 10,000 interactions during the event weekend, and allowed users to obtain a Bunbori so Torracat could evolve into Feral Incineroar.

Even-tempered and ready for a challenge, these Pokémon excel at absorbing lightning and combining it with inferno-like temperatures to decimate opponents.