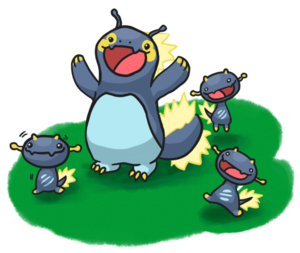 Drawn by Shazi
The Galvanic Line encompasses Galvanic Wooper and Galvanic Quagsire which were released as part of the eighty-first Mass-Click Weekend on the 2nd of August 2021 and are Exclusive Pokémon.

Galvanic Wooper can be obtained by trading with other users, or by breeding with a parent of the Galvanic Line.

Galvanic Wooper was distributed as part of the eighty-first Mass-Click Weekend on PokéFarm Q. Its egg was given as a reward to any individual user with at least 10,000 interactions during the event weekend.

A dark blue Egg with yellow spots on top and light blue diagonal stripes in the centre. It tends to gain a static charge.

These city-dwelling Pokémon will gather in sports fields during thunderstorms to guide lightning strikes. After being shocked, they run around whooping excitedly with the excess energy gained.

Most often found lounging around power lines, it will often beg passers-by for food. If left to go hungry, it will sap electricity from the area, causing blackouts.