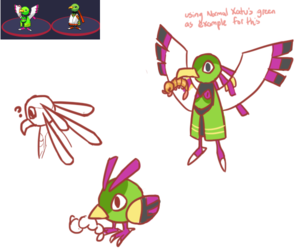 Drawn by Novan-chan.
The Early Bird Line encompasses Early Bird Natu and Early Bird Xatu, which were released as part of a Special Event for Early-Access code users on the 1st of August 2014 and are considered Exclusive Pokémon.

Early Bird Natu can be obtained by trading with other users or breeding with a parent being from the Early Bird Line.

The Early Bird Line was the very first event to use the in-built event system. It was also only released to 978 users, rather than the usual 1,000 as it was only released to the users that had used an Early-Access Code to join PokéFarm Q (reboot to PF1/Original Pokefarm) before its launch.

A very bright green Egg with yellow spots on the sides and a purple spot on the top. It's very light.

Early Bird Natu likes to be the first for everything. It's so early, it always catches the worm.

80
Total
320
Name origin: Based on the proverb, "The early bird gets the worm, but the second mouse gets the cheese."

Early Bird Xatu holds its early-caught worm up with pride. It celebrates doing this while the sun comes up.