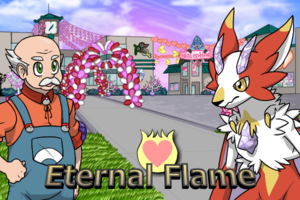 The Eternal Flame event was an Event that ran for two weeks in 2018, starting on February 14th and ending February 27th. During the event, users completed a list of tasks relating to a storyline featuring Flaroptera and Avaragon. During this time, Sweet Hearts and Cookies could be exchanged like previous years via the Sweet Heart Stand. However, there were no prizes given for number of treats given/exchanged.

The user arrives at a very pink and festive town as they are approached by Professor Laurel. Prof. Laurel tells the user that the day is all about love and gives them a Sweet Heart and prompts them to go to a stand covered in chocolates and flowers.

After returning from the stand, the user is again approached by the Professor. He is having troubles helping a Pokemon, and asks for the user's help, showing them an obviously upset Flaroptera. The user gifts the Flaroptera a perfect berry that is quickly accepted and then eaten. The Flaroptera says something to the user, which Niet kindly translates for them. Flaroptera is looking for a gift for Avaragon, a Pokemon who already has everything he could ever want. This creates a problem for Flaroptera, as they don't know what to get him.

The user and Flaroptera go on another walk for some more inspiration and they run into Garthic and Sei exchanging gifts. Garthic gives her a new scarf to replace her old tattered one, and Sei loves it! This gives Flaroptera another idea: the gift of renewal. Flaroptera says something excitedly, which Garthic translates for the user. Avaragon had a Reaper Cloth that is very tattered and Flaroptera wishes to get him a new one.

Receiving a new Reaper Cloth from the user, Flaroptera runs off again. A (very cute) scene plays of Sei convincing Garthic to carry her before the user catches up to Flaroptera. The Bandicoon comes back, steals the Reaper Cloth, and escapes once again. The user comforts Flaroptera once again and they go to find another gift.

Looping back to the Lab after yet another walk, the user and Flaroptera run into Professors Holly and Laurel. Prof. Laurel had just given Holly a box of chocolates. Flaroptera gets another idea: the gift of food. Flaroptera doesn't say anything to the user, but points at the box and nods at them. The user gives Flaroptera a box of 12 Sweet Hearts and they run off again. For the third time, Bandicoon steals the gift. It taunts Flaroptera by eating the gift right in front of them. Bandicoon flees once more. 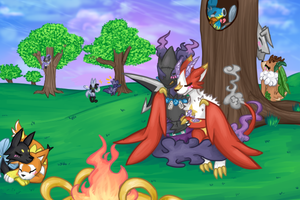 As Flaroptera and the user go for a walk once again, the two come across a new stand selling beautiful flowers in various shades of purples, reds, and whites. A man named Leslie approaches and asks Flaroptera what they'd like. They look at the flowers, commenting on them, until they point to the ones they like. Leslie informs Flaroptera that the flowers are fuchsias that he crossbred himself. He also tells them that fuchsias represent love, and they are very popular this time of year. Fuchsias don't just represent love, however. They represent the trust in the person you're giving them to. Flaroptera loves the flowers and proceeds to tell Leslie about Avaragon. He hands them a potted Karen Jennifer for 5,000 credits, which the user provides.

On their way to give the gift to Avaragon, Flaroptera and the user encounter the Bandicoon again. After inspecting them, the Bandicoon leaves without taking anything. Finally being able to give their gift, Flaroptera excitedly gives the plant to Avaragon. He accepts it, and pulls out a different fuchsia plant. The colors complement each other perfectly, which Leslie had probably planned.

After giving Avaragon a hug, Flaroptera tells him the story of what had happened. Avaragon began to take out all the other gifts he had received: an Amethyst Tiara from Taimorpha, a new Reaper Cloth from Lunupine, and a (slightly wet) box of chocolates from Hydrinifor. The Bandicoon returns wearing a stolen scarf, gives Flaroptera a thumbs up, and quickly flees again. Sei appears, scarf-less, and greets the group. She tells them that Bandicoon is weird, but helps in its own way. Sei chases after the Bandicoon again in an attempt to get her scarf back.

When a user was sent a gift of Sweet Hearts, or Cookies, SYSTEM would send the doted a message. The message would contain the username of the sender, or "A secret someone" if they chose not to reveal it, a sentence stating the amount gifted, and a quirky little saying at the end.