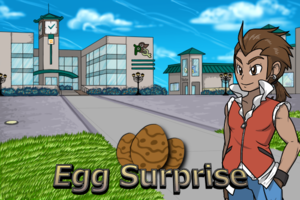 Egg Surprise was an Event that ran for two weeks in 2018, starting on April 1st and ending April 15th. During the event, users had to beat a minigame alongside a storyline featuring Doug.

The user arrives at the town square, where they find Garthic. Garthic explains that Doug is holding this year's Easter event, but he is concerned that Doug may be doing something suspicious for the reason that he has done scams in the past. Doug appears behind Garthic, and a bit into Garthic's talk, joins the conversation. After a bit of banter between Garthic and him, he dismisses Garthic by saying that Sally is pinning down Niet for tinkering with her code too much. Garthic leaves to go help Niet. Doug then turns to the user and asks them to test his new game for the event.

Upon beating the game, Doug congratulates the user on their win and arranges to have the prize, an Easter Egg Exeggcute, sent to the Collection Area in the Trade Centre. He mentions that the user is free to continue playing the minigame in order to win more Easter Eggs until the event ends, and takes his leave. 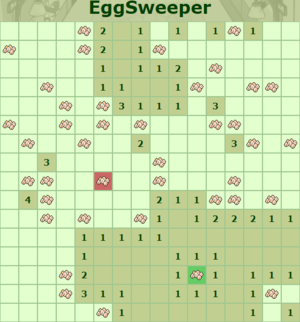 Doug's game, also called EggSweeper, is a Pokémon-themed version of the classic game called Minesweeper. Users are presented with a 16 by 16 grid. They must click on one of the boxes within the grid, which reveals the box's contents. In order to win, the user must find all the hidden Eggs without revealing any Exeggcute.

If a tile that is not an Exeggcute is revealed, it will immediately open all tiles in the surrounding area until there is a "wall" of tiles that have a number on them. This number indicates that there is an Exeggcute in any of the immediate eight surrounding tiles. This includes diagonal tiles.

If a tile is suspected to have an Exeggcute under it, then the user can right-click or long-press the left-click to mark a flag on the tile. Alternatively, the mode may be switched from "Normal" to "Flag", which allows free marking and unmarking of flags without any risk of opening a tile.

The game ends if an Exeggcute is revealed or all 10 of the Eggs are found. If any Eggs were found, then the user must wait up to 10 minutes before playing again. The number is reduced by 1 for each Egg not found, with a minimum of 1 minute. If they did not find any Eggs, they may play again immediately.

Regardless if the user wins the game or not, they will get an

Easter Egg for each Egg they found in the game.

The first time the user wins the game, they receive a commemorative Custom Sprite Exeggcute.