Doug is an NPC on PokéFarm Q. He is a Trader and runs Mega Evolution. 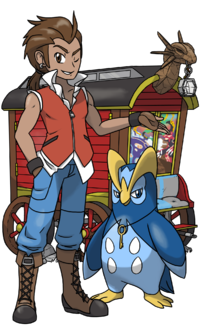 Doug
Doug is a young man of 21 years with ruffled brown hair and brown eyes. He wears a white shirt under a red jacket, brown gloves, jeans and brown coloured boots. He is often seen with his companion, Prinplup.

In personality, Doug is very street-smart and clever. He is known to be independent, having been on his own from a young age. Doug can also be very tricky and crafty; in his earlier years he's known to have passed off items as far more valuable than they were actually worth.

Doug is street-smart. He was born in Hearthome City, but he ran away at an early age. He grew up in the busy town of Veilstone, where he learned many tricks to get what he wanted out of people. After a while, he realised he would have to move, as people wisened up to his tricks. He packed up a cart with his belongings and moved somewhere else. On the way, a Trainer mistook him for a travelling merchant and asked to buy a Potion to heal his Pokémon. That gave Doug the idea he needed. He helped the Trainer, and when he arrived in the next town he announced himself as a Trader, offering to swap the items he had with any takers. Most of what he had was junk, but he passed it off as valuable and made a quick profit, moving away before anyone could catch on. This kept up for a few years, but after a while, he started cutting some fairer deals - after all, he had actual goods to trade now. Still, he made sure to come out on top with every deal he made. He heard about PokéFarm from one of his customers and decided it would make a perfect place to set up shop. He arrived with his cart, but after a while, he rented out a section of the market building for his business.

Doug acquired a Piplup Egg as part of a trade. He hatched it and raised the Pokémon within. He taught his Piplup everything he could, turning him into a useful partner. He evolved into Prinplup when he got into a fight that he couldn't handle as a Piplup. As a result of his dominant nature, the ridges on his head are larger than normal. He holds the key to Doug's cart and rides comfortably in it when they travel. He guards the key and cart fiercely and isn't afraid to attack anyone acting suspiciously. Prinplup hopes to evolve into Empoleon in the next few years, eager to gain new strength and a more intimidating appearance to deter troublemakers.

Doug is primarily seen in the Market area. Whenever a user puts an item up for sale, a 5% fee (rounded down) is taken by Doug. Canceling or changing the sale within one hour gives the user a full refund. After the hour, the refund is 4% of the original price.

In the Credits section of PokéFarm Q, Doug offers a service to upgrade Relic items the user has. This also comes with a fee.

Doug permanently "Mega Evolves" the user's Pokémon. When visited, he allows the user to trade in Vouchers for Mega Stones.